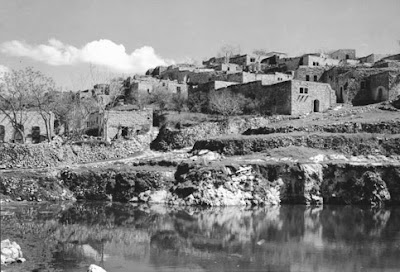 The village of Suhmata before it was destroyed in 1948 by Zionist militias.

(Isabelle Humphries has worked for several years with Palestinian non-governmental organizations in the Galilee, and is completing a doctoral thesis on Palestinian internally displaced)

"Unlike the majority of Palestinian refugees dispersed across the Middle East and beyond, Wagih Semaan can drive a few kilometers from his house, cross a ditch and a fence and sit in the stones of the village he was driven out of at the age of 11. But despite his Israeli "citizenship," he is no more able to return to live on his land than the Palestinian sitting in Ein al-Hilwe camp across the Lebanese border.

Wagih is one of more than 250,000 Palestinian refugees who are internally displaced -- they managed to remain in their homeland yet are denied access to their lands and homes. Like the rest of the million Palestinians inside Israel, internally displaced live with Israeli passports yet in all sectors are treated as second class citizens. While the brutality meted out to residents of the West Bank and Gaza demonstrates clearly that Palestinian life is not valued by the state of Israel, the second class status of Palestinians inside the Jewish state shows the inherent apartheid nature of a state defined as Jewish. Israeli apartheid would not end even in the (very unlikely) scenario that Israel totally withdrew to 1967 borders. The case of the internally displaced and land confiscation from Palestinians legally defined by Israel as "citizens" -- both in 1948, and continuing since that date -- undermines any Israeli claims that it functions as a democracy for its Palestinian citizens........"
Posted by Tony at 8:14 AM