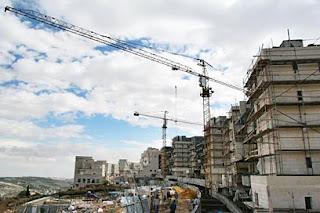 "Despite Israel's commitment to freeze construction in the settlements following the Annapolis peace conference in November 2007, construction in the West Bank and east Jerusalem has in fact increased in recent months, a new report published by Peace Now revealed Monday.

According to the Left-wing group, tenders for the construction of some 750 housing units in east Jerusalem have been published after the peace conference, a huge increase compared to the 46 tenders published last year.

All in all, the government is currently promoting the building of 3,648 new housing units in Jerusalem's neighborhoods located east of the Green Line, the report stated.

'Nothing left of Israel's promise'
Meanwhile, 101 settlements are currently being expanded, and thousands of housing units are under construction. About 20 of the projects are being carried out east of the separation fence's route.

Peace Now also claims that instead of removing outposts, the government has enabled their ongoing expansion. Construction has been registered in 58 outposts over the last three month; 36 new caravans have been placed in outposts and 16 permanent structures have been erected. The building of an additional eight permanent structures is currently underway.

"Since Olmert’s announcement at the Annapolis Summit regarding the freeze on the settlements, dozens of declarations have been published by ministers in his government who have tried to prevent the construction freeze and therefore reduce it to the point of ineffectiveness, until, in the end, almost nothing is left of the promise that Israel would freeze construction in the settlements," the organization concluded......."
Posted by Tony at 4:37 AM