Taliban welcome back an old friend 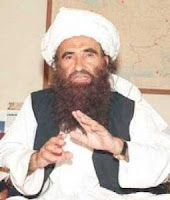 "The release of a video featuring legendary Afghan mujahideen leader Jalaluddin Haqqani, whom many believed dead since he disappeared from the public eye several years ago, is a major boost for the Taliban. Not only does Haqqani pledge his considerable support for the Taliban, his return to the scene will galvanize Pashtun tribal leaders and serve as a unifying force for the Taliban-led resistance.

KARACHI - Like a voice from the grave, legendary Afghan mujahideen leader Jalaluddin Haqqani has emerged from years of silence to boldly launch the Taliban-led spring offensive in Afghanistan, at the same time burying any doubts of a split between his coalition of resistance groups and Mullah Omar's Taliban.

In a video message released last week and which is only now coming into wider circulation, Haqqani, speaking in his trademark low-pitched voice and with his hair dyed red with henna, called on the people of Afghanistan "to stand up against the US-led forces in Afghanistan and drive them out".

The release of the message by Haqqani, who has a bounty on his head as one of the US's most-wanted men, coincides with an important North Atlantic Treaty Organization (NATO) meeting in Bucharest, Romania, this weekend at which the divided alliance will try to hammer out a more coherent strategy in the war in Afghanistan which many analysts believe it is losing........"
Posted by Tony at 4:31 AM