Israeli settlement drive in WB the highest in a decade 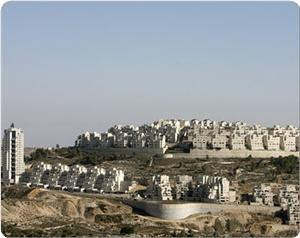 "OCCUPIED JERUSALEM, (PIC)-- The Israeli construction plan of new settlements units in the occupied West Bank has registered a new boost not witnessed in the past decade, according to the Hebrew press.

'Yediot Ahronot' newspaper said on Wednesday that the Israeli occupation government was planning the construction of 1,908 settlement units in the West Bank in 2008, and added that all the units would be built in the major settlement blocs, which Tel Aviv said it would retain in any final peace agreement with the Palestinians.

The units would be built in the settlement blocs near to Bethlehem, Ramallah, Al-Khalil and Salfit cities.

Hebrew statistics revealed that the number of new settlements units was not witnessed since the early nineties of the past century.

The occupation government in 2007 built only 45 new settlement units in the West Bank."
Posted by Tony at 6:36 AM