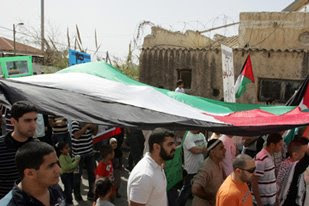 Comment: It is to be noted that this is the first time ever that the Land Day is commemorated in Jaffa. The state of Israel has maintained a policy to totally Judaize Jaffa, which is the city where I was born in 1945. My family and tens of thousands of Palestinians were forced out of Jaffa by the advancing Jewish terrorist gangs in 1948 in an ethnic cleansing campaign that is continuing to this day.

"More than 1,000 Arabs living in Israel have marched through the port city of Jaffa to commemorate the killing of six people during a 1976 protest against the confiscation of Palestinian land.

The demonstrators on Friday also denounced plans to move about 500 families out of the city south of Tel Aviv.

Israel has issued legal notices to the Arab families asking them to legally prove their ownership of land that they had occupied of leave it.

Palestinian families in Israel say that the authorities are forcing them out to bring Jews from abroad into Israel.

"We chose to hold one of the marches here this year because it is the government's policy to Judaize the city," Abed Satel, the head of the League for Arabs of Jaffa, said.

The demonstration was one of several "Land Day" rallies being staged across the country.

The day has been observed by Israel's large Arab minority of 1.2 million every year since protesters clashed with security forces in 1976 after a government decision to expropriate land in the Galilee......

"The protesters have been demanding an end to the confiscation policy.

"They want to continue living in the land that they have lived in, and many of their parents have lived in. Both Israeli and Palestinian residents, say that the policy must stop."

Protesters waved Palestinian flags and banners in Arabic reading "We are here to stay, we will never leave our homes" and others in Hebrew reading "Take your hands off our homes".

"I came to protest because they want to demolish my home. They want to give it to French Jews," Laila Anad, one of the demonstrators, said......."
Posted by Tony at 5:27 AM