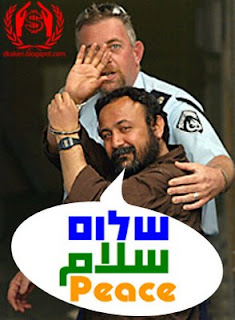 "03/04/2008 Former Israeli defense minister Amir Peretz will begin a campaign after Pessah, which celebrates freedom, to bring about the release of Fatah leader Marwan Barghouti.

Barghouti was convicted of murder and sentenced to five life sentences in prison for killing Israelis during the second Intifada. But he is also a rising star in Palestinian Authority President Mahmoud Abbas's Fatah and his likely successor.

In a speech for Labor activists loyal to him, Peretz said that after the holiday, he would visit “the families of those killed by Barghouti” and ask them to publicly press for Barghouti's release.

"I will tell them there is a leader respected by the Palestinian people and we need him out of jail, so he could run the PA together with Abu Mazen," Peretz said. "With all the pain I feel for the blood that [they] shed, we need this move to prevent further bloodshed."

Peretz also called for talks with Hamas," because we need to make peace with all the Palestinians and not just some of them."

The event was intended to allow Peretz to flex his muscles amid his ongoing rivalry with his successor, Ehud Barak. Hundreds of supporters packed the party's headquarters in Tel Aviv's Hatikva quarter.

Peretz used the event to call for reconciliation with Barak, while at the same time warning him that he and other Labor officials could bypass him to make the key decisions needed for the party's future."
Posted by Tony at 6:22 AM