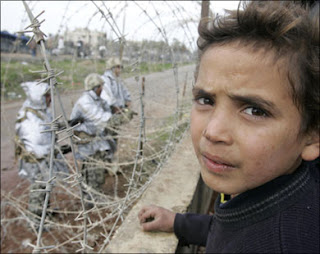 "ARISH, (PIC)-- The Egyptian authorities barred Monday evening 40 European MPs from the European campaign to end the siege on Gaza from reaching Rafah to express their solidarity with the besieged Gaza people.

An Egyptian officer told the European delegates after arriving in the Arish city in northern Sinai that he received orders to prevent them from continuing their way to Rafah.

The spokesman for the European campaign expressed the MPs' dismay at the arbitrary measure practiced against them by Egypt.

The European MPs brought with them medical and food assistance for the Gaza people to alleviate some of their daily suffering.

The European delegation is expected to hold a press conference explaining the hardships it faced in trying to reach Rafah."
Posted by Tony at 5:55 AM