Bush loses out in Bucharest 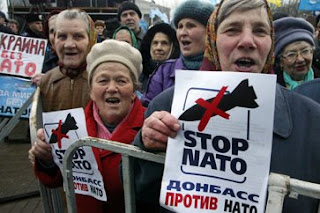 "As the Nato conference in Bucharest comes to a close, it is clear George Bush did not get much of what he bargained for.

There was no big bang as Nato postponed its membership action plan for Georgia and the Ukraine and approved an already agreed upon missile system.

Sceptical West Europeans have not turned their back on the Bush administration, but neither did they behave as generously or acquiescently as they have at previous summits.

Bush's adventures in Afghanistan and Iraq have hurt Washington's standing within the alliance, even if it remains its only prospective leader.

The US might get hundreds more troops for Afghanistan, but not a real and effective European commitment for the long term.......

It has become clear that the more Nato expands the less effective it has become.

And even then, the Europeans remain generally reluctant to increase their military budget to four per cent of their GDP as Washington would want them to do in order to share the burden of its adventures."
Posted by Tony at 4:57 AM