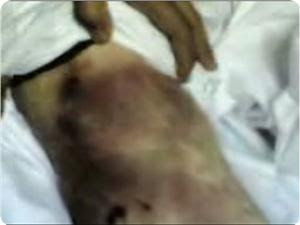 From Khalid Amayreh in Ramallah

"An independent inquiry commission made up of Palestinian parliamentarians not affiliated with either Fatah or Hamas has held the Palestinian Authority (PA), especially its General Intelligence or “Mukhabarat, ” fully responsible for the death of a Palestinian detainee in PA custody in mid February.

Declaring committee findings during a press conference in Ramallah Thursday, 3 April, the committee head, independent lawmaker Hasan Khreishe said “we have reached the conclusion that the Palestinian General Intelligence is fully responsible for the death of Majd al Bargouthi”

“The committee holds the General Intelligence Service and its chief ( Tawfiq Tirawi) fully legally and morally responsible for the death of the Palestinian citizen Majd al Barghouthi.”

Khreishe said the committee was demanding that PA Chairman Mahmoud Abbas punish all those involved, directly or indirectly, in the death of Barghouthi.

“We demand that everyone who ordered, participated, or observed or sought to cover up acts of torture be prosecuted according to the law.”

The committee also urged the PA to put an end to all forms of physical and psychological torture against detainees in conformity with Palestinian as well as international laws and norms......

Barghouthi, a 43-year-old imam or prayer-leader, died while under interrogation in the custody of the General Intelligence in Ramallah on 23 February. He had been violently arrested at a local mosque near Ramallah by masked members of the Mukhabrat. Mukhabarat officials denied any wrong doing, claiming that Barghouthi died of natural causes and that he was suffering from a chronic illness in the heart......

The parliamentarian committee report “stressed that clear signs of torture were found all over the victim’s body, including the forehands, thighs, knees, legs, and along his back.”

The report described the forensic report produced by the Mukhabarat as “unconvincing.” “The medical history of Majd al Barghouthi two days prior to his death showed no evidence of any cardiac illness or any other illness” .......
Hamas: PA is a lying entity
Reacting to the findings of the inquiry committee, the Islamic Resistance Movement, Hamas, said the findings vindicated Hamas’s initial account of the incident and underscored PA lies. “The findings of the committee show that the forensic doctors who issued the concocted report were operating under the influence of the PA security agencies and that they lied knowingly and deliberately and that they breached the trust invested in them.”

Moreover, Sami Abu Zuhri, a spokesman of Hamas, lashed out at the Ramallah-based regime, calling the PA “a team of liars and cheats and thugs.” “We are speaking of a team that lies to the Palestinian people, a team that employs every conceivable immoral tactic to deceive the people in order to protect their own interests and the interests of the Zionist regime.”

Abu Zuhri said the “murder” of Barghouthi was one incident out of many, adding that there were dozens of political activists now languishing in PA jails and dungeons, whose lives were in real danger.

PA political and security officials have so far refused to comment on the report, saying they will study it first before making any comments on it."
Posted by Tony at 4:26 AM