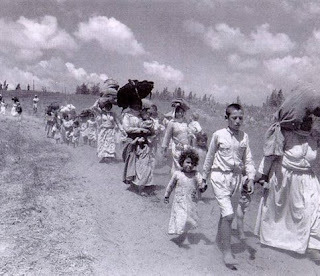 "How can you celebrate? The establishment of the state of Israel 60 years ago was a settler-colonial project that systematically and violently uprooted more than 750,000 Palestinian Arabs from their lands and homes. Sixty years ago, Zionist militias and gangs ransacked Palestinian properties and destroyed hundreds of Palestinian villages. How can people of conscience celebrate this catastrophe?

Israel at 60 is a state that continues to deny Palestinian refugees their UN-sanctioned right to return to their homes and receive compensation, simply because they are "non-Jews." It still illegally occupies Palestinian and other Arab lands, in violation of numerous UN resolutions. It persists in its blatant denial of fundamental Palestinian human rights, in contravention of international humanitarian law and human rights conventions. It still subjects its own Palestinian citizens to a system of institutionalized discrimination, strongly reminiscent of the defunct apartheid regime in South Africa. And Israel gets away with all this, thanks to the unprecedented immunity granted to it by the unlimited and munificent US and European economic, diplomatic, political, and academic support.

In view of this multi-faceted oppression that is the reality of Israel today, we regard any Arab or international participation, whether individual or institutional, in any activity that contributes, either directly or indirectly, to the "celebrations" of Israel's establishment, as collusion in the perpetuation of the dispossession and uprooting of refugees, the prolongation of the occupation, and the deepening of Israeli apartheid. Inviting Israel as a "guest of honor" to the Turin and Paris book fairs, for example, is not only a deliberate betrayal of basic principles of human rights, including those enshrined in the laws of the European Union itself, but is also a deliberate attempt to cover up Israel's crimes against the Arab people, especially its successive war crimes in Lebanon and Palestine, and its acts of slow genocide against a million and a half Palestinians in the besieged and collectively punished Gaza Strip. In short, celebrating "Israel at 60" is tantamount to dancing on Palestinian graves......."
Posted by Tony at 5:26 AM