This 'bombshell' took a year falling 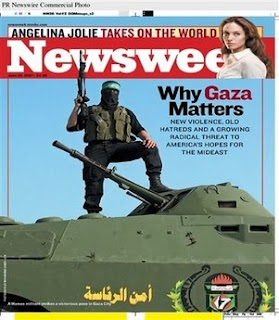 "CAIRO, 2 April (IPS) - A recent article in Vanity Fair magazine "exposing" a US-planned coup attempt against Palestinian resistance movement Hamas last year has ignited a storm of debate about Washington's Middle East policies. Yet for more than nine months, details of the plot were reported in the independent Arabic press -- and elsewhere -- leading some observers to ask: where was the mainstream media?

"From the very beginning, Hamas has publicly insisted that what happened in Gaza last year came in reaction to plans being hatched against it," Tarek Abd al-Gaber, former news correspondent for Egyptian state television covering Israel and the Palestinian territories, told IPS.

Hamas has been widely blamed in much of the mainstream media for carrying out a "violent coup" against the Palestinian Authority (PA) in the Gaza Strip last summer. After six days of heavy fighting, Hamas wrested control of the territory from the government of PA President Mahmoud Abbas, leader of the US-backed Fatah movement, in mid-June.......

Most western capitals, led by Washington, quickly condemned the takeover, placing blame for the dangerous turn of events squarely on Hamas. The refrain was taken up by much of the western media, which consistently portrayed the dispute as one between "extremist" Hamas in the Gaza Strip and "moderate" Fatah in the West Bank.

Many Arab capitals, too, denounced Hamas's seizure of the volatile territory. The day after the upset, Egyptian President Hosni Mubarak was quoted in the state press as describing what happened as "the overthrow of Palestinian legitimacy."......

Yet in its April issue, the US leisure magazine Vanity Fair makes a startling claim: that Hamas's takeover of the territory was prompted by a secret US plan aimed at extirpating the Islamist group's leadership in Gaza.

In an article entitled "The Gaza Bombshell," the magazine purports to "lay bare a covert initiative" approved by the White House and implemented by the US State Department "to provoke a Palestinian civil war."

Relying on confidential documents and former administration officials, author David Rose writes that after Hamas's unexpected victory in the 2006 Palestinian legislative elections, the US administration drew up a plan to arm Fatah cadres with the aim of forcefully removing Hamas from power in Gaza. Under the terms of the arrangement, Rose writes, Fatah received arms and financing through a handful of Washington's Arab allies, including Egypt and Jordan........

White House and State Department officials have strenuously denied the article's claims. Nevertheless, the Gaza "bombshell" has received wide coverage in the western news media, with several commentators comparing the magazine's "revelations" to the Iran-Contra scandal of the 1980s, which also involved the covert -- and illegal -- supply of arms to the Middle East.

Yet according to many local observers, the existence of the so-called "Dayton Plan" has been fairly well known since the upset in Gaza more than nine months ago.

"Hamas has consistently and publicly stated that what happened in June came in reaction to the Dayton Plan, which aimed at the group's destruction," said Ibrahim Eissa, editor-in-chief of independent daily al-Dustour, which published Hamas's allegations last summer.......

Abd al-Gaber agreed that Egyptian state media wholly neglected to convey Hamas's point of view regarding the reasons for the Gaza seizure.

"The official press took the US line and simply blamed Hamas for everything," he said. "The White House insisted on calling Hamas's actions a 'coup' regardless of the circumstances, and official media -- in the west and in the Arab world -- repeated this mantra.".......

According to Eissa, Egypt's official press has yet to mention the contentious Vanity Fair report.

"Even now, the state press hasn't reported on the Vanity Fair story," he said, noting that al-Dustour, by contrast, had published translated selections from the article in the first week of March.

Eissa added: "Like much of the western media, the official Arab press would rather ignore Hamas than publish stories that might serve to justify the resistance group's actions.""