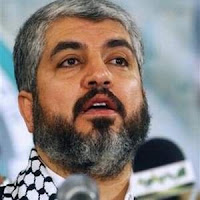 "DAMASCUS, Syria: The exiled leader of Hamas, Khaled Mashaal, has said that Israel exaggerates the Palestinian militant group's military strength, accusing the Jewish state of seeking to spark a war against Hamas and the Lebanese guerrilla force Hezbollah.

Israel launched a military offensive against the Gaza Strip in early March, seeking to quash Hamas militants firing rockets at Israel towns. More than 100 Palestinians were killed before Israel ended the assault and Egypt began trying to mediate a "tahdiya" or calm between Hamas and Israel.

"Hamas' military capacity is humble, but the enemy is exaggerating it in an attempt to justify its aggression and justify more aggression and more brutality," Mashaal told The Associated Press in an interview Sunday at his office in Damascus.

"Our weapons are humble but we have great will. This is what makes our action effective," he said......."
Posted by Tony at 5:19 AM