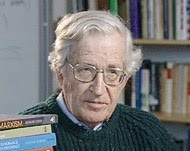 "17/05/2010 American linguist Noam Chomsky described Israel as a “Stalinist regime” after he was denied entry into occupied territories Sunday. Chomsky had been scheduled to lecture at the Bir Zeit University near Ramallah, and visit Bil'in and AL-Khalil, as well as meet with Palestinian Prime Minister Salam Fayyad and various Palestinian activists.

In a telephone conversation Sunday night from Amman, Jordan, the prominent Jewish professor told Haaretz that he concluded from the questions of the Israeli official that the fact that he came to lecture at a Palestinian and not an Israeli university led to the decision to deny him entry.

"I find it hard to think of a similar case, in which entry to a person is denied because he is not lecturing in Tel Aviv. Perhaps only in Stalinist regimes," Chomsky told Haaretz......

"The official asked me why I was lecturing only at Bir Zeit and not an Israeli university," Chomsky recalled. "I told him that I have lectured a great deal in Israel. The official read the following statement: 'Israel does not like what you say.'" Chomsky replied: "Find one government in the world which does."

"The young man asked me whether I had ever been denied entry into other countries. I told him that once, to Czechoslovakia, after the Soviet invasion in 1968," he said.....

He was then told by the official: "You have spoken with [Hassan] Nasrallah."
"True," Chomsky told him. "When I was in Lebanon [prior to the war in 2006] I spoke with people from the entire political spectrum there, as in Israel I also spoke with people on the right."....

The official asked Chomsky why he did not have an Israeli passport. "I replied I am an American citizen," Chomsky said.....

He said that Israel's behavior today reminds him of that of South Africa in the 1960s, when it realized that it was already considered a pariah, but thought that it would resolve the problem with better public relations.

FINKELSTEIN: ISRAEL HAS GONE OVER THE EDGE
Dr. Norman Finkelstein, a US Jewish political scientist known for his outspoken criticism of Israel's policies, has already experienced what Chomsky experienced Sunday at the Allenby Bridge border crossing. Exactly two years ago, Finkelstein arrived in Israel and was denied entry for "security reasons."

In a conversation with Ynet from his home in the US, Finkelstein explained that Israel had gone over the edge of the precipice.” This is something Israelis need to think about, he said, as Israel is "looking down its nose" at the whole world, even though it’s a tiny state.”

Israel has passed the point of no return, Finkelstein asserted, saying he hoped that there were still enough people in Israel to stop the dangerous deterioration, and that the picture taking shape was hard to stomach. The case of Chomsky is a grave indication, among many other indications seen each day, that Israel is losing its grip on reality, he said.
“The case of Chomsky, like the responses to Richard Goldstone after the publication of the so-called Goldstone report on Israel's war in the Gaza Strip, shows that intolerance is growing and the tribe mentality is becoming dominant,” he said.
“Israel calls itself the only democracy in the Middle East, he continued, but – as far as he knows – it is the only place in the world that prevented Chomsky from entering was the Soviet bloc during the Cold War, so what does this say about Israel?” he asked."
Posted by Tony at 4:08 AM