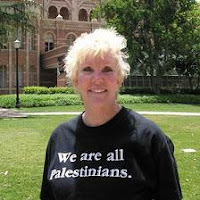 "We’ve all caught the fever, every one of us who works to send boats to Gaza. From August 2006, when a handful of us started the Free Gaza Movement, every one who has joined us has been stricken with a bad case of the disease. It is chronic. It sometimes causes afflicted patients to insist that if just one more voyage can be planned to this small slice of the Mediterranean, we’ll all be in remission. There is no real cure in sight… yet.

Gaza Fever has now attacked thousands of us who have a passionate sense of justice.

The disease began shortly after Israel invaded Lebanon in 2006, as a group of us were in despair that the Palestinians, once again, were the forgotten symptom of Israel’s grand designs. As the world watched the defeat of Israel by a small band of guerrilla fighters in Lebanon, Israel decided it would take its wrath out on the Palestinians, specifically the Palestinians of Gaza. We watched as Israel, in January 2009, deliberately bombed 1.5 million Palestinians into abject poverty, a man-made catastrophe bordering on genocide.....

Malaysia and Ireland and the people who represent this mission embody civil society at its best.

Now our four boats will rendezvous in the Mediterranean with boats from the European Campaign to End the Siege of Gaza (ECESG), Insani Yardim Vakfi (IHH), Ship to Gaza Greece, Ship to Gaza Sweden, and the International Committee to Lift the Siege on Gaza.

We’re named the Freedom Flotilla and we sail to deliver reconstruction supplies, paper, medical equipment and toys for the children. The fever has spread to other organizations and other countries.

Will there be a cure?...only if their fishermen can fish without being shot and murdered, only if their farmers can harvest their crops without Israeli military vehicles burning down their wheat, only if Gaza has the same rights as every country on the Mediterranean… the right to free and open trade with the rest of the world.

Then and only then will our severe case of Gaza Fever be cured. "
Posted by Tony at 9:27 AM