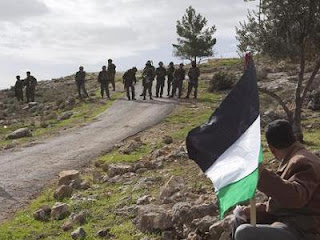 ".....This negative branding is an international effort. Noam Chomsky, who was recently prevented from entering Israel and the West Bank, has long been a target of witch hunters like Alan Dershowitz, but other less known actors are also playing a part. Mitchell Bard, the executive director of the American-Israeli Co-operative Enterprise, and Gil Troy, a historian at McGill University, recently published a position paper summarising the discussions of the Working Group on Delegitimisation at the 2009 Global Forum against Anti-Semitism. Bard and Troy suggest that it is crucial to ‘rename and reframe’ the Palestinian boycott, divestment and sanctions movement (BDS). ‘We need to point out how BDS crosses the line from legitimate criticism to historically-laden, anti-Semitic messaging.’ The report goes on to present the struggle against BDS as a war, using such terms as enemy, command centre, war room, fight, battle and battlefield.

But the branding campaign does not stop with human rights NGOs, their donors, individual critics or supporters of BDS. International humanitarian and human rights law – which emerged following the horrors of the Holocaust – is also under attack. This, at least, was one of the messages emerging from a conference organised by the Lawfare Project. The logic is clear: international human rights law is being deployed as a tool to criticise Israeli policies in the Occupied Territories and is consequently responsible for damaging Israel’s reputation; it therefore must be curbed. This is an extremely frightening thought."
Posted by Tony at 4:24 AM