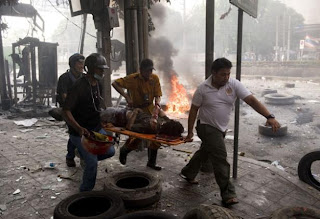 By Andrew Buncombe
The Independent

"It was the morning they had feared the troops would come with their guns and drive them from their fortified encampment, but the old woman was unflinching. Sitting in front of a stage from which hung a banner that read "Peaceful protesters not terrorists", Sutjai Malasri said she had travelled more than 400 miles from her village to join the demonstrations two months ago. "I love democracy," declared the farmer's widow, her teeth broken, her mouth a mass of churning red betel nut. "We are not afraid. We are not afraid of the army."[How many Arabs can say or do what this woman is doing?? A few dozens?]

The heavily defended encampment in the centre of Bangkok, in which anti-government protesters are holed up as they demand the ousting of Prime Minister Abhisit Vejjajiva and the calling of a new election, is many things. It is sprawling but bordered, frenetic yet orderly, tense yet ebullient. Most of all it is defiant...."
Posted by Tony at 4:36 AM