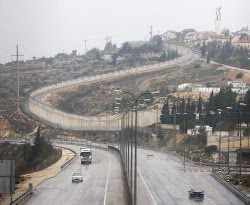 The ban on Palestinians using highway 443 has been lifted but sidestepped by the Israeli army. It's bare-faced segregation

"....And why bother getting to the bones of the issue by asking why those few Palestinians would have attacked Israeli cars whistling through the West Bank, on a road that has been dug out of occupied land, in the midst of the viciously crushed second intifada? No; far easier to completely bar Palestinian passage on this road. And when the Israeli court challenges that, just block the road in a different way and see if those pedantic judges shut up.

But could the court be disinclined to shut up on this matter? The Israeli military claims that the court knew about the partial-opening plans. Meanwhile, some 1,000 Israeli families have petitioned the court to keep the road closed because they say the army's solution is too lax.

And the Association of Civil Rights in Israel, which filed the original petition to open the road, immediately filed another in response to army's unblocked-but-closed policy.....
Posted by Tony at 4:30 AM