Cost of collaborating with Israel. This Too Will be the Future of Abbas and Fayyad. 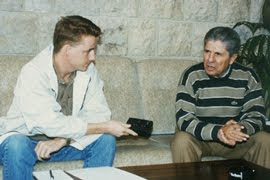 "This week marks the 10th anniversary of the withdrawal of Israeli troops from south Lebanon.

Recalling that occupation, this article examines the false promises made to the head of the South Lebanon Army, a former Lebanese militia allied to Israel.

Throughout the 1990s there were two Lebanese militias that remained armed and active, even though the Lebanese civil war had ended in 1990.

One was the Hezbollah movement, which still operates to this day. The other was the South Lebanon Army (SLA).

On November 12, 1993, seven years before Israel's withdrawal from Lebanon, I interviewed General Antoine Lahd, the commander of the SLA - a militia that was armed, trained and financed by Israel....

The SLA were pejoratively described by most Lebanese as the 'sand bags of Israel' - they manned the zone's most dangerous and exposed outposts and suffered far higher losses than the Israelis over the years.

The SLA also ran the notorious al-Khiam prison, where hundreds of Lebanese prisoners were held in terrible conditions, mostly without charge or trial.

Although Lahd was a Maronite Christian, the militia he commanded was made up mostly of Shia Muslims.....

"There is an agreement between Israel and the SLA that they [the Israelis] will not withdraw from here before the establishment of peace and a solution has been found for the SLA and the people of the area."

He continued: "The Israeli prime minister [Yitzak Rabin] stated publicly that among the conditions for peace are the disarmament of Hezbollah, the stopping of all military operations, security on both sides of the border and a solution for the SLA."

He clarified that this "solution" meant integrating the SLA militiamen into Lebanon's regular army.........

He placed full faith in the Israelis. He had little option, since he enjoyed zero political credibility among most Lebanese and was therefore left isolated and with nowhere to run when he was eventually abandoned by Israel.[Abbas and Fayyad take notice!]....
In the end, the fate of Lahd and his men was dictated more by the Israeli public than the assurances of Israel's former leader.

Israel's withdrawal in May 2000 was swift and sudden. It caught everyone by surprise - including Lahd and his men.....

The bloodbath that many feared would follow an Israeli withdrawal did not materialise.

Many SLA officers and their families fled to Israel.... 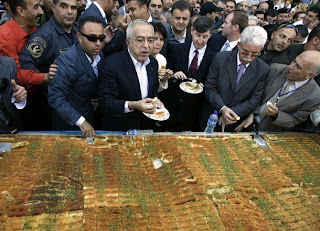 Lahd's current whereabouts is unclear, although there are reports that he opened a restaurant in Tel Aviv.[When Fayyad does the same, he can sell his Knafeh, of Guinness book fame, in his Tel Aviv restaurant. Saeb Erikat can be his maitre d'.] ...."
Posted by Tony at 4:22 AM