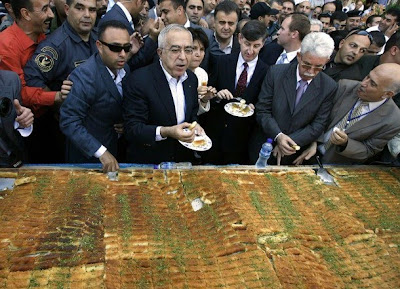 "RAMALLAH, May 20, 2010 (IPS) - Israeli settlers are beginning to feel the bite of an economic boycott campaign launched by the Palestinian Authority (PA) against goods produced in the illegal Israeli settlements dotting the occupied West Bank...."

COMMENT
I think that this is a charade by the collaborationist PA and the World Bank's employee Fayyad who continue "security coordination" with the IOF, to salvage some minimal support in the West Bank. They are engaging in such theatrics while "negotiating" selling out the last of Palestinian rights!
Let Fayyad concentrate on ceremonies for Palestinian records in the Guinness book of records. National accomplishments such as Knafeh, Hummus and Msakhkhan!
Posted by Tony at 4:20 AM