Hopes Fade for US Help to Restore Civil Liberties 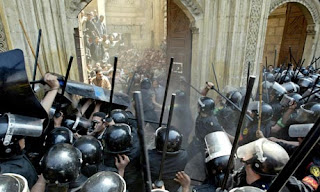 CAIRO, May 20 , 2010 (IPS) - Egypt's decision to extend its oppressive Emergency Law for two more years drew a tepid response from Washington, prompting criticism that U.S. administrations - including that of President Barack Obama - only push for political reform in Egypt when it suits their geostrategic interest.

"Obama has completely gone back on his promise to support democracy in the Arab world," Hafez Abu Saeda, secretary-general of the Cairo-based Egyptian Organisation for Human Rights, told IPS. "He has obviously reached the conclusion that regional stability - i.e., keeping dictatorial regimes in power - is more in the U.S. interest than democracy."....

"The West, namely the U.S. and European Union, is hardly a true champion for freedom and democracy," Ibrahim Eissa, prominent political analyst and editor-in-chief of independent daily ‘Al-Dustour’, wrote in an Apr. 28 editorial. "It only wants obedient Arab governments that will serve its interests."

"As long as Mubarak remains a friend of western policy objectives and plays good neighbour to Israel, the West will give its stamp of approval to the regime and its blatantly rigged elections," Eissa added......."
Posted by Tony at 4:32 AM