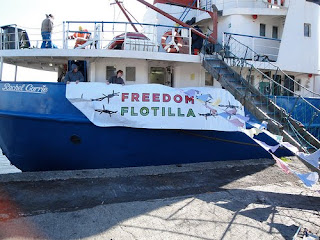 Written by Free Gaza Team 21 May 2010
"(Dublin, May 21, 2010) The Free Gaza Movement welcomes statements by the Irish Government to ensure the safety of the passengers and cargo currently making their way to the besieged Gaza Strip.
His Excellency Mr. Breifne O’Reilly, Irish ambassador in Tel Aviv, traveled to the Israeli Foreign Ministry in Jerusalem this week “to ensure a peaceful outcome which will enable the safe delivery of these humanitarian supplies”.
The Free Gaza Movement commends the Irish government for showing true international leadership regarding the illegal siege of Gaza and is calling for other governments to follow suit. The 9 ship-strong flotilla, carrying 10,000+ tons of medical, reconstruction and educational goods, has only been made possible by the actions and donations of citizens from 60+ countries. A major donation was received from Malaysia, part of which was used to purchase, outfit etc the MV Rachel Corrie the humanitarian cargo ship. http://www.counterpunch.org/berlin05182010.html
On Wednesday, Green Party spokesperson for Foreign Affairs and Defence, Senator Mark Dearey, who has personally inspected the cargo onboard the M.V. Rachel Corrie, echoed the Ambassador’s call stating: “Irish passport holders (must) be treated respectfully and be allowed complete their mission. It is the least we should be insisting on, given the gross abuse of Irish passports by Israeli agents in recent times.” Senator Dearey, who has recently replaced Minister Ciarán Cuffe as spokesperson, was referring to Mossad’s use of five bogus Irish passports when a Hamas official was assassinated in Dubai earlier this year......"
Posted by Tony at 6:17 AM