Eyewitness: Under fire in Thailand 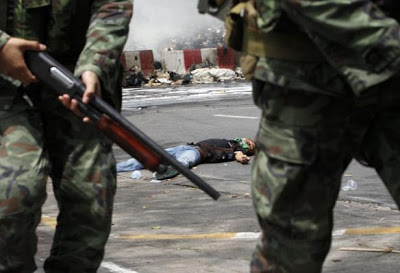 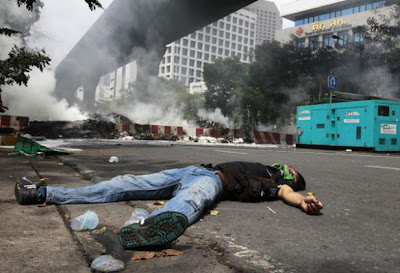 By Andrew Buncombe in Bangkok
The Independent
"There was nothing for us to do but take cover, as the incoming fire sprayed and hissed. People lay flat, terrified, crouched behind cars, tried to squeeze themselves into the meagre protection offered by the wheel hubs. They took cover frantically, diving behind not just cars, but trucks, trees and even flower pots.

This was near to the entrance of a Buddhist temple, a supposed oasis, a place of prayer. But we knew its sanctity had been fatally breached when the crack of rifles and the sound of bullets ricocheted close to the temple's souvenir shop.

One after the other, the injured were carried, rushed and dragged inside the temple compound. On bamboo mats, blankets anything to hand, they were carried in bloodied and screaming. Fearless Red Shirt volunteers did what they could. They used towels, bandages and plasters to try to treat ugly bullet wounds that needed surgery, not first aid kits......"
Posted by Tony at 3:45 AM