Sayyed Nasrallah: On Sunday We'll Celebrate and The Israelis Will Go to Shelters 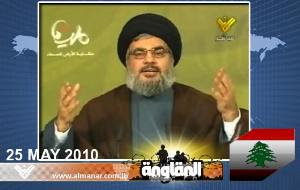 "21/05/2010 “On this day, ten years ago, the residents of the Qonaytra and Ghandouriyeh, were gathering for the funeral of a woman from occupied Qonaytra. On this day, the first decisive step was taken on the path of liberating the south. Those people took the initiative to storm into the crossing and remove all roadblocks to return to their occupied town. When this really took place, every other fence tumbled down on 22, 23, and 24 May 2000. By the 25th of May, the battle had settled,’ Hezbollah Secretary General Sayyed Hasan Nasrallah said Friday afternoon as he officially inaugurated the resistance landmark site in the southern town of Mlita, as part of the efforts to enhance Jihadi toursim in Lebanon......"
Video of Speech by Sayyed Nasrallah on May 21: