The heresy of the Greeks offers hope 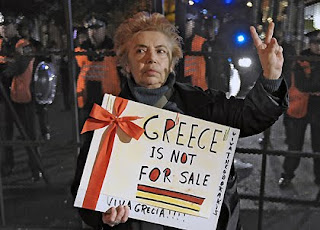 In his latest column for the New Statesman, John Pilger inverts the perception of Greece as a "junk country" and sees hope in the uprising of ordinary Greeks protesting against the "bailout" of an economy plunged into debt by the tax-evading rich. Greece, he writes, is a microcosm for the developed world, where class war are the words seldom used because they are the truth.

"As Britain’s political class pretends that its arranged marriage of Tweedledee to Tweedledum is democracy, the inspiration for the rest of us is Greece. It is hardly surprising that Greece is presented not as a beacon but as a “junk country” getting its comeuppance for its “bloated public sector” and “culture of cutting corners” (the Observer). The heresy of Greece is that the uprising of its ordinary people provides an authentic hope unlike that lavished upon the warlord in the White House.

The crisis that has led to the “rescue” of Greece by the European banks and the International Monetary Fund is the product of a grotesque financial system which itself is in crisis. Greece is a microcosm of a modern class war that is rarely reported as such and is waged with all the urgency of panic among the imperial rich.....

The people on the streets of Athens do not suffer this malaise. They are clear who the enemy is and they regard themselves as once again under foreign occupation. And once again, they are rising up, with courage. When David Cameron begins to cleave £6 billion from public services in Britain, he will be bargaining that Greece will not happen in Britain. We should prove him wrong."
Posted by Tony at 1:36 PM