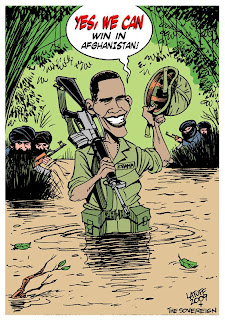 Destroy Kandahar in Order to Save It?

"Afghan President Hamid Karzai arrived in London Saturday as US generals express doubts that they are having any success in fighting the Taliban.

The US and NATO commander in Afghanistan Gen Stanley McChrystal, who was boasting of military progress only three months ago, confessed last week that “nobody is winning.” His only claim now is that the Taliban have lost momentum compared to last year.

Karzai’s reception in London and Washington highlights the political dilemma of the US and UK in Afghanistan since both have more or less openly denounced the corruption of his regime and the mass fraud at the polls by which he was re-elected last year.

In a leaked memo the US ambassador in Kabul Gen Karl Eikenberry said Karzai was “not an adequate strategic partner” and was interested only in using foreign troops to keep himself in power...."
Posted by Tony at 9:04 AM