Second Ship Joins the Freedom Flotilla on Way to Gaza 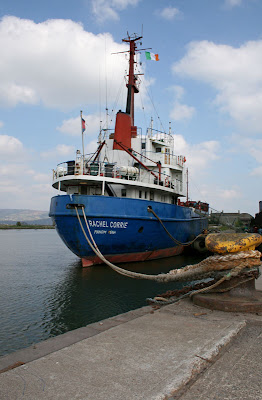 "[Istanbul, Turkey – 22 May, 2010] Amid cheers and waving of Turkish and Palestinian flags, the second ship to join the Freedom Flotilla left Istanbul this afternoon. Sponsored by the Turkish humanitarian organization, Insani Yardim Vakfi (IHH), the ship will carry 600 passengers to Gaza as part of the ‘blockade busting’ flotilla. It joins eight other boats coming from three other countries carrying 10,000 tons of supplies to the Palestinian people, supplies that have been denied to them by Israel.
Boats will meet in the Mediterranean, then turn toward Gaza to arrive at its beseiged slice of beachfront by the end of May. Free Gaza Movement’s MV Rachel Corrie is already on her way from Ireland and is presently off the coast of Portugal loaded with cement, paper and supplies for school children and medical equipment.

John Ging, Head of United Nation's Relief and Works Agency (UNRWA) in the Gaza Strip since 2006 said, “We recommend the world send ships to the shores of Gaza, and we believe that Israel would not stop these vessels because the sea is open, and many human rights organizations have been successful in previous similar steps, and proved that breaking the siege on Gaza is possible.”