Itching to Fight Another Muslim Enemy 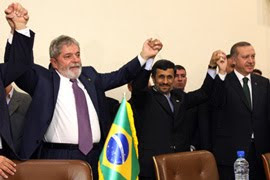 "If you read the major American newspapers or watch the propaganda on cable TV, it’s pretty clear that the U.S. foreign policy Establishment is again spoiling for a fight, this time in Iran.

Just as Iraq’s Saddam Hussein was the designated target of American hate in 2002 and 2003, Iranian President Mahmoud Ahmadinejad is playing that role now. Back then, any event in Iraq was cast in the harshest possible light; today, the same is done with Iran....

Even as President Barack Obama has demanded more nuclear transparency from all countries, he himself continues the longstanding charade of U.S. presidents, dating back to Richard Nixon, pretending that they don’t know that Israel has nuclear weapons.

In line with that history of double standards, Washington’s neocon opinion leaders now are framing what could be a positive step toward peace – the Iran-Turkey-Brazil accord – as another failure.

But the larger truth may be that the neocons are simply chafing under the possibility that their hunger for a new conflict in the Middle East might be delayed indefinitely and that – heaven forbid – cooler heads might prevail. "
Posted by Tony at 3:51 AM