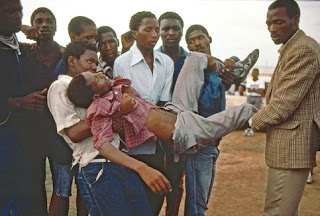 (Adri Nieuwhof and Bangani Ngeleza are independent consultants from Switzerland and South Africa, respectively. Nieuwhof supported the South African anti-apartheid struggle as a member of the Holland Committee on Southern Africa. Ngeleza participated in the liberation struggle as an activist with the African National Congress. When he was 11, his father Eric Ngeleza was sentenced to ten years on Robben Island. )

"Two weeks after Israel imposed a travel ban on him, Ameer Makhoul, a well-respected Palestinian leader holding Israeli citizenship, was kidnapped from his home on 6 May in the middle of the night. The persecution of Makhoul brings back memories of the South Africa apartheid regime: he has been held incommunicado and was not allowed access to his lawyer for two weeks; a court order prohibited publication of any information on the case against Makhoul for 90 days; and the so-called evidence justifying the "security charges" against Makhoul remains secret. During the South Africa anti-apartheid movement, similar tactics were used against those advocating for freedom and equal rights, who were accused of terrorism and having links with the Soviet Union......"
Posted by Tony at 6:26 AM