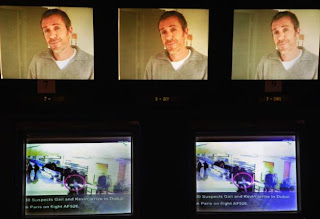 "Within 48 hours of becoming Foreign Secretary, William Hague faces a political crisis over the Middle East. The emirate of Dubai has named a British citizen as a 19th suspect of the killing of Mahmoud al-Mabhouh, the Hamas official murdered in the emirate four months ago, apparently by a group that included holders of forged British passports. According to a source in the United Arab Emirates, the suspect arrived in Dubai under his own name and carrying a genuine British passport.

The document, the details of which are known by The Independent on Sunday but which we have decided not to publish, shows that he holds a real British passport dated 24 October 2007, valid for 11 years, and was born in 1948. It is believed that his father was a Jewish Palestinian who migrated to the UK just after the Second World War. Dubai police have informed Interpol of the name and passport number of the suspect. The man is believed to be hiding in Western Europe...."
Posted by Tony at 4:50 AM