An act born from the burning hatred of foreign occupation 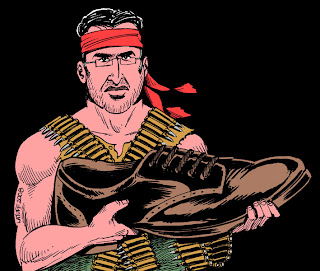 By Patrick Cockburn
The Independent
(Cartoon by Carlos Latuff)
".......
It is hatred of the occupation, which shines through Mr Zaidi's intelligent and revealing speech made yesterday after his release from jail. It is the voice of outraged Iraqi nationalism. He said: "I travelled through my burning land and saw with my own eyes the pains of the victims, and heard with my own ears the scream of the bereaved and the orphans."

Not surprisingly Mr Zaidi's action and his cry – "this is a gift from the Iraqis; this is the farewell kiss, you dog" – turned him into an instant hero across the Muslim world and beyond.......

The freed journalist spoke bitterly yesterday of having been tortured while in custody. He said he was beaten with cables and metal tubes in a room not far from the press conference where he mounted his assault on Mr Bush. He was also given electric shocks, he said.

Unfortunately, his allegations are all too likely to be true, since torturing suspects is once again the norm in Baghdad."
Posted by Tony at 4:20 AM