UK Minister: We Do not Support Boycotts against Israel 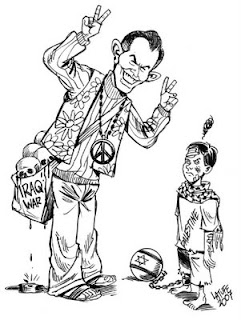 "18/09/2009 "The UK does not support boycotts against Israel as they are unhelpful and polarize the debate," British Secretary of State for Business Peter Mandelson told Ynet Thursday evening in response to a decision by British labor unions to support a ban on importing Israeli goods that are produced in illegal settlements.

The boycott, approved at the annual conference of the Trades Union Congress, also calls for an end to arms trading with Israel and disinvestment from some companies. It was reportedly initiated in response to Israel's military offensive in Gaza........"
Posted by Tony at 6:28 AM