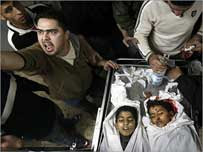 "Israel's offensive against Gaza last January was "a deliberately disproportionate attack designed to punish, humiliate and terrorise a civilian population", for which some Israelis should face "individual criminal responsibility", a UN investigation has found.

The inquiry, led by the former South African judge Richard Goldstone, concluded that both the Israeli military and Hamas committed war crimes and possible crimes against humanity during the three-week conflict, but singled out Israel and its policy towards the Palestinians of Gaza for the most serious condemnation. The inquiry rejected Israel's argument that the war was a response to Palestinian rocket fire and therefore an act of self-defence......."
Posted by Tony at 3:44 AM