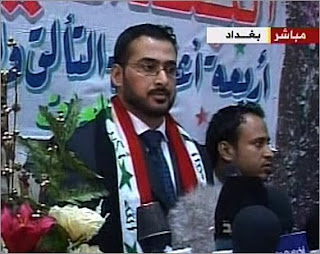 "Muntadhar al-Zeidi, the television reporter jailed for throwing his shoes at George Bush, the former US president, last year has been released.

He was set to be freed on Monday but red tape delayed the decision by a day.

Addressing a news conference shortly after his release on Tuesday, al-Zeidi, 30, said he was tortured with beatings, whippings and electric shocks during his first few days in custody......"
Posted by Tony at 4:45 AM