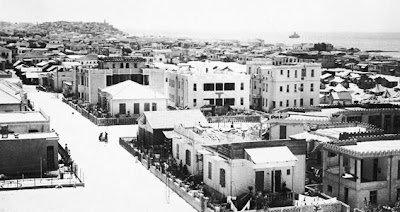 Jaffa in 1929, before the creation of the state of Israel.
By Mark Levine
Al-Jazeera

"......By turning a spotlight on Tel Aviv, the festival intervened in an ongoing and deeply divisive conflict. Organisers had a responsibility to ensure that their intervention would encourage soul-searching and the search for a more accurate representation of the city's, and country's, past and present.

In framing the choice of Tel Aviv, the festival's co-director described the city as a "young, dynamic city that, like Toronto, celebrates its diversity".

The reality is that to the extent the city celebrates its diversity, it has done so largely by marginalising the city's Palestinian Arab heritage and present-day citizens.

In 1909, Tel Aviv's founders sought to create a space that was "modern, Jewish ... [and] European" and prohibited the sale of property to non-Jews.

Tel Aviv was depicted in Zionist poetry, art, journalism and literature as having emerged like a "reed inserted into a sea of sand"; any connection to Jaffa and the surrounding Arab environment was ignored.......

The reality was quite different. While founded on a sandy region near the sea shore, Tel Aviv was deeply connected to Jaffa, which had its own, growing Jewish community that had reached over 30,000 by the 1940s.

The new neighbourhood was also part of a complex ecosystem that included citrus orchards and farms, Jaffa and its famous port, mills, bedouin encampments, and six Palestinian villages.

The remnants of one village, Summel, are still visible along Ibn Givrol Street, not far from where Yitzhak Rabin, the former Israeli prime minister, was murdered. The former home of the sheikh of the Palestinian village of Sheikh Muwannis has long been used as the faculty club of Tel Aviv University......"
Posted by Tony at 2:46 AM