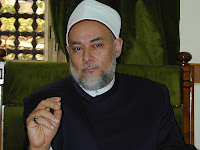 "Baggy trousers are definitely "in" this season. I have it on no lesser authority than Egypt's grand mufti, Ali Goma'a, that icon of clerical cool.

The esteemed Azharite's informal fashion fatwa – you could call it a fadwa – just happened to be all the rage this summer in the form of "harem pants", as Rachel Shabi assures me.

But I doubt Goma'a is interested in developing a career as a style guru or a modish mufti or getting his mug on the cover of Elle magazine. Known as woman-friendly by the standards of the clergy, Goma'a was making it clear that he disapproved of what happened in neighbouring Sudan, where falling foul of the regime's "fashion police" can have serious consequences, as the courageous Lubna Hussein and other unfortunate Sudanese women have discovered.

Luckily, in Egypt, Goma'a and the religious establishment's views are non-binding, although there are some worrying signs that the country is slowly developing its very own de facto "morality police". Nevertheless, in principle, Egyptians are free to dress pretty much as they please – even if hijabless women are an increasingly marginalised minority, as Gihan Abou Zeid points out in this article.......

This has led to some bizarre interpretations, especially with the ratings wars between "satellite muftis" on TV. As a result, a whole line in "have you heard the latest fatwa" jokes has emerged. Egyptians, when they dismiss nonsensical, uninformed talk, say: "Batal tefti" ("Stop making fatwas").........

Nevertheless, sensible or not, the trouble with fatwas is that they discourage individuals from thinking for themselves, undermine the notion of individual choice, and deprive people of the moral responsibility for their own actions.
As everyone's doing it, my fatwa for today is: enough with fatwas!"
Posted by Tony at 4:25 AM