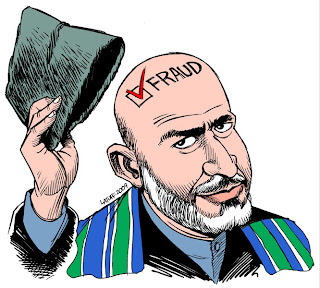 Is Karzai's massive election fraud the final nail in the COIN strategy's coffin?

"Has the U.S. lost the Afghan war, even before President Obama’s "surge" is plugged in and the "COIN" strategy is put in place?

"Clear, hold, and build": – that’s the "new" counterinsurgency doctrine [.pdf] being touted by the Center for a New American Strategy (CNAS), Obama’s favorite national security think-tank, as the salvation of our faltering Afghan campaign. The idea is to build "democratic" institutions and give the Afghans a stake in defending their government and society from the Taliban onslaught that is supposedly threatening them at every turn. Yet what if their democracy turns out to be not worth defending? What if their president, a preening fashion plate with ties to organized crime figures (including his brother), decided to steal an election, proclaim himself chief of state in spite of massive evidence of election fraud, and refused to even speak to his American sponsors, let alone go along with a U.S.-brokered compromise with his chief election rival?......."
Posted by Tony at 6:02 AM