Is America Hooked on War? 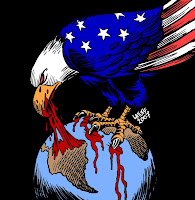 ""War is peace" was one of the memorable slogans on the facade of the Ministry of Truth, Minitrue in "Newspeak," the language invented by George Orwell in 1948 for his dystopian novel 1984. Some 60 years later, a quarter-century after Orwell’s imagined future bit the dust, the phrase is, in a number of ways, eerily applicable to the United States.....

And peace itself? Simply put, there’s no money in it. Of the nearly trillion dollars the U.S. invests in war and war-related activities, nothing goes to peace. No money, no effort, no thought. The very idea that there might be peaceful alternatives to endless war is so discredited that it’s left to utopians, bleeding hearts, and feathered doves. As in Orwell’s Newspeak, while "peace" remains with us, it’s largely been shorn of its possibilities. No longer the opposite of war, it’s just a rhetorical flourish embedded, like one of our reporters, in Warspeak.

What a world might be like in which we began not just to withdraw our troops from one war to fight another, but to seriously scale down the American global mission, close those hundreds of bases — recently, there were almost 300 of them, macro to micro, in Iraq alone — and bring our military home is beyond imagining. To discuss such obviously absurd possibilities makes you an apostate to America’s true religion and addiction, which is force. However much it might seem that most of us are peaceably watching our TV sets or computer screens or iPhones, we Americans are also — always — marching as to war. We may not all bother to attend the church of our new religion, but we all tithe. We all partake. In this sense, we live peaceably in a state of war. "
Posted by Tony at 4:22 AM