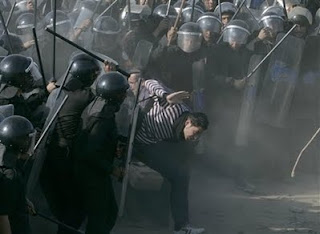 Police in Egypt are using Ramadan to target secularists. The government must do more to protect individual liberty

"Over the last week, several blogs have included reports about the Egyptian police arresting people for eating and smoking publicly during the day in Ramadan, when Muslims are supposed to be fasting. At first I thought this might just be the action of a few individual officers or – since the blogs did not cite a source – perhaps it was nothing more than a rumour. I was shocked to discover that not only was it true, but it was also actually a campaign sponsored by Egypt's interior ministry......

In the face of pressure from religious groups who are using their political capital to fight for yet more measures to "protect" religious values, the government should remember that human rights and individual liberty are also values that need protection."
Posted by Tony at 3:18 AM