Afghanistan: Where Empires Go to Die

Genghis Khan could not hold onto Afghanistan. Neither will the United States

"On September 7 the Swedish aid agency Swedish Committee for Afghanistan reported that the previous week US soldiers raided one of its hospitals. According to the director of the aid agency, Anders Fange, troops stormed through both the men's and women's wards, where they frantically searched for wounded Taliban fighters.

Soldiers demanded that hospital administrators inform the military of any incoming patients who might be insurgents, after which the military would then decide if said patients would be admitted or not. Fange called the incident "not only a clear violation of globally recognized humanitarian principles about the sanctity of health facilities and staff in areas of conflict, but also a clear breach of the civil-military agreement" between nongovernmental organizations and international forces.

Fange said that US troops broke down doors and tied up visitors and hospital staff.

Impeding operations at medical facilities in Afghanistan directly violate the Fourth Geneva Convention, which strictly forbids attacks on emergency vehicles and the obstruction of medical operations during wartime........ 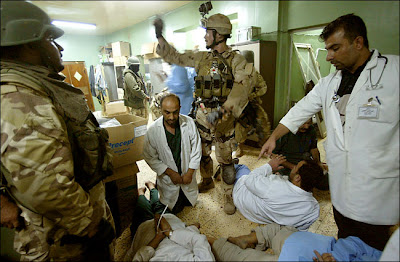 Let us recall November 8, 2004, when the US military launched its siege of Fallujah. The first thing done by the US military was to invade and occupy Fallujah General Hospital. Then, too, like this recent incident in Afghanistan, doctors, patients and visitors alike had their hands tied and they were laid on the ground, oftentimes face down, and held at gunpoint.
During my first four trips to Iraq, I commonly encountered hospital staff who reported US military raids on their facilities. US soldiers regularly entered hospitals to search for wounded resistance fighters.
Doctors from Fallujah General Hospital, as well as others who worked in clinics throughout the city during both US sieges of Fallujah in 2004, reported that US Marines obstructed their services and that US snipers intentionally targeted their clinics and ambulances.........."
Posted by Tony at 8:44 AM