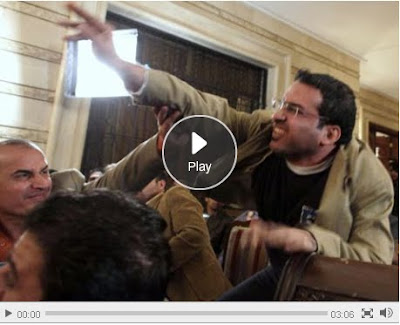 'My flower to the occupier': Freed journalist Muntazer al-Zaidi says his action was retribution for US atrocities

"The Iraqi journalist who threw his shoes at George Bush has marked his release from jail by angrily defending his actions as a revenge against was he described as actions of a "war criminal".

Muntazer al-Zaidi was given a rapturous welcome by his supporters and family, who sacrificed six sheep to mark his release and hung laurels of flowers around his neck.

Wearing an Iraqi flag, Zaidi said the infamous and widely broadcast incident last December was retribution for the atrocities of the US occupation, which he had witnessed as a journalist......."
Posted by Tony at 4:13 AM