What Arab Armies Do Best: Slaughter Their Own People and Protect the Dictator. 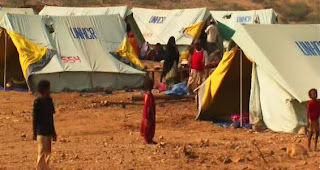 By May Ying Welsh in North Yemen

"....."Whenever we hear a sound we run into our tents. We remember what happened back home. The sound of bombing never leaves your mind. When you hear a plane you just freeze and can't move - you think it's about to fire on you."

Families here could be forgiven for feeling unsafe. On September 16, over 80 people were killed during an air raid on a settlement for displaced civilians in Amran province a few hundred kilometres away.

Askar says she and her family fled the fighting and sought refuge at the al-Mazraq IDP camp
The army launched the "Operation Scorched Earth" offensive against Shia rebels fighting for greater autonomy in Yemen's northernmost Saada province.

But it has proven to be a conflict impoverished Yemen can ill afford, and it has hit the people of this agricultural region hard......

No food or water

Izzedeen says the situation is even more critical in Baqim, 20km from the Saudi border, where up to 30,000 civilians, the vast majority of them women and children, are stranded in the open without food or water and caught in the crossfire........"
Posted by Tony at 4:51 PM