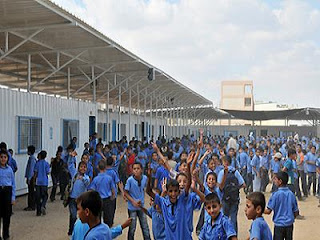 Israel's hermetic sealing of the strip, as part of its blockade against Hamas, has prevented most supplies of paper, textbooks, notebooks, ink cartridges, stationery, school uniforms, school bags, and computers and their spare parts.

"Through our education system the UN Relief and Works Agency (UNRWA) is spreading the message of universal respect for human rights, peaceful coexistence and tolerance in an atmosphere that since the blockade has become increasingly desperate and radicalised," says UNRWA spokesman Chris Gunness.

"The best way for Israel to prevent us spreading that message to the 200,000 Gazan children at our schools is to block us sending in educational supplies," Gunness told IPS........"
Posted by Tony at 4:31 AM