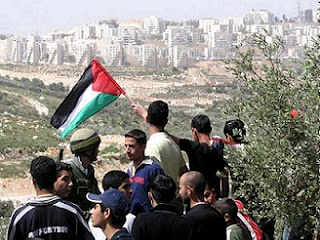 A few years back, Dr. Abu Sitta made a major speech at a dinner in Los Angeles. The topic was the Palestinian right of return and Zionist land theft in Palestine. It was an impressive talk illustrated with maps and charts. After all, the speaker is an expert in this area, having spent the last 60 years studying and compiling facts on this subject.

As it happened, just a few days earlier, 'Arafat had published an article in The New York Times, in which he blatantly said that he ('Arafat) realized that the return of the Palestinian refugees is now impractical! As most Arab leaders, 'Arafat was well-known for speaking with a forked-tongue: One message to the Palestinian audience and just the opposite to Western powers.

So, after the dinner I stood up and asked Dr. Abu Sitta to explain this obvious, blatant, contradiction. In his response Dr. Abu Sitta never gave a straight answer. He tried to weasel his way out. 'Arafat, after all, was supporting him and his research.

I see that after all these years, nothing has changed, except that even less of Palestinian land remains in Palestinian hands. Dr. Abu Sitta still speaks of the "Palestinian Leadership" and what it should do now. Was it not the leadership of 'Arafat which brought about the current disaster? Who signed the Oslo agreements? Who kept what he called "the Palestinian Karzai" as "Prime Minister" to please the U.S.? I could go on and on.

In a very traditional fashion, the author ends his article by stating that in spite of losing everything, the Palestinians will win in the end and live happily ever after, since justice is on their side! This medieval line of reasoning is vintage Arab admission of defeat. Since I was a little kid, I heard this type of reasoning and the Palestinian situation has gone from bad to worse.

Sorry to be so blunt, but there is no such thing as the inevitability of justice prevailing. Just ask the natives of North and South America and the aborigines of Australia.

Faced with an aggressive, scientific, vigorous, expansionist Zionism which plans for the next 100 years and puts such plans into practice, I do not see a match from the Arab and Palestinian sides. There are those who say that Islam is the answer. Sorry to say it, but if they mean by that Hamas, then they are totally wrong. Islam, as practiced by Hamas is not the answer, it is the problem.

The last (and probably only) Palestinian leader who was on the right track, was Dr. George Habash, but those days are long gone. -- Tony Sayegh.

"While the news headlines were occupied with the freeze or suspension of Jewish settlements in the Occupied Palestinian Territories or with the competition for positions in the sixth Fateh conference in Bethlehem, Israel is putting into effect the most devastating operation since the ethnic cleansing of Palestine in al Nakba of 1948. This new operation aims to eliminate irrevocably Palestinian rights and historical roots in Palestine.

The Zionist leadership in Israel felt bold enough to transform the ideological slogan of ‘Jewish Israel’ into a reality on the ground. The Knesset, the Israel Parliament, passed a law on August 3rd, 2009, after its second and third readings, which allowed the sale of “Absentees” Palestinian refugees’ land to Jewish individuals and Jewish institutions exclusively anywhere in the world. Thus, the legal right of the original Palestinian owner to his land would be severed through creating a barrier between the owner and his property. The passing of the new law represents an audacious initiative by the current Israeli government that no previous Israeli government dared contemplate or venture into.......

However, a great deal yet has to be done that has not really started. Foremost, it is incumbent upon the Arab League [COMMENT: Are you dreaming Mr. Abu Sitta? What Arab League? The Arab League is busy formalizing the normalization with Israel, not condemning it! Let us get real, and stop deluding ourselves about "Palestinian Leadership," and "Arab League." These are the ones who brought about the disaster in the first place! Overthrow the bastards first before anything!] to draft a resolution for the next meeting in September of the UN General Assembly that would call for the condemnation, the annulment and immediate halt and reversal of the sale of Palestinian absentees’ possessions. The draft resolution should call on the Secretary General of the United Nations to appoint a fact finding mission to visit Israel to collect information on absentee Palestinian refugees’ possessions, ensure their proper due registration of titles to the rightful Palestinian owners, and establish estimates of the accrued revenues for 62 years from these possessions that are due the rightful owners (the subject that was called for by Palestinian refugees’ lands expert Jarvis called for in 1964). The draft resolution must further call for the placing of the Palestinian refugees’ possessions under international trusteeship.

It is the obligation of the Palestinian Authority, as it finishes from attending to the marginal issues of allocation of posts, to take the urgent diplomatic and the practical steps to addressing this problem, for, otherwise, it would find itself, in no time, without land on which it could one day found its new state......."
Posted by Tony at 4:46 PM