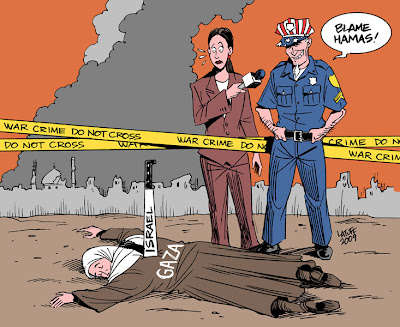 The State Department said the conclusions of a UN commission headed by South African Justice Richard Goldstone were “unfair” to Israel and did not fully deal with the role in the conflict of the Palestinian resistance group Hamas. It said the United States objected to a recommendation that Israeli actions be referred to the International Criminal Court.

"Although the report addresses all sides of the conflict, its overwhelming focus is on the actions of Israel," spokesman Ian Kelly told reporters. “While the report makes overly sweeping conclusions of fact and law with respect to Israel, its conclusions regarding Hamas' deplorable conduct and its failure to comply with international humanitarian law during the conflict are more general and tentative”, he said.

The UN report, released Tuesday, faulted Israel for civilian deaths in Gaza, saying it used disproportionate force in the offensive.........."
Posted by Tony at 4:06 AM