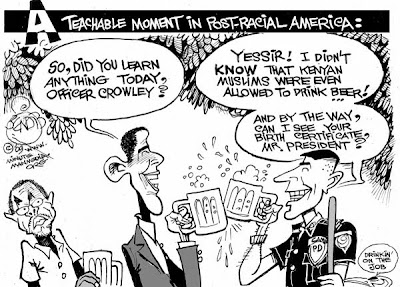 "After lurking near the surface of political discourse in America for months, awkward questions about race and bigotry burst into the open yesterday after Jimmy Carter forthrightly suggested that "an overwhelming portion" of the more violent opposition to President Barack Obama and his policies has to do with the colour of his skin.

Barely had the words been uttered by the former President than the political firmament was alight. Some were simply shocked that he had dared to tread so heavily on such delicate ground. Some were in enthusiastic agreement. And his critics, including a few Democrats, were furious......."
Posted by Tony at 3:44 AM