Everyone seems to be agreeing with Bin Laden these days 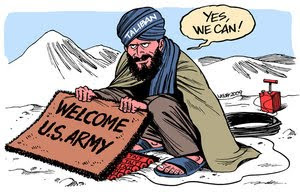 Only Obama, it seems, fails to get the message that we’re losing Afghanistan

(Cartoon by Carlos Latuff)
"......In any event, Muslim fighters wold wear down the US-led coalition in Afghanistan "like we exhausted the Soviet Union for 10 years until it collapsed". Funny, that. It's exactly what bin Laden told me personally in Afghanistan – four years before 9/11 and the start of America's 2001 adventure south of the Amu Darya river.

Almost on cue this week came those in North America who agree with Obama – albeit they would never associate themselves with the Evil One, let alone dare question Israel's cheerleading for the Iraqi war. "I do not believe we can build a democratic state in Afghanistan," announces Dianne Feinstein, the California Democrat who chairs the senate intelligence committee. "I believe it will remain a tribal entity." And Nancy Pelosi, the House Speaker, does not believe "there is a great deal of support for sending more troops to Afghanistan".

Colin Kenny, chair of Canada's senate committee on national security and defence, said this week that "what we hoped to accomplish in Afghanistan has proved to be impossible. We are hurtling towards a Vietnam ending".

Close your eyes and pretend those last words came from the al-Qa'ida cave. Not difficult to believe, is it? Only Obama, it seems, fails to get the message.......

And what do America's Republican hawks – the subject of bin Laden's latest sermon – now say about the Afghan catastrophe? "More troops will not guarantee success in Afghanistan," failed Republican contender and ex-Vietnam vet John McCain told us this week. "But a failure to send them will be a guarantee of failure." How Osama must have chuckled as this preposterous announcement echoed around al-Qa'ida's dark cave."
Posted by Tony at 7:05 AM