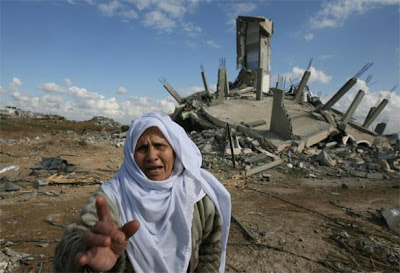 "Israel targeted "the people of Gaza as a whole" in the three-week military operation which is estimated to have killed more than 1,300 Palestinians at the beginning of this year, according to a UN-commissioned report published yesterday.

A UN fact-finding mission led by the South African judge Richard Goldstone said Israel should face prosecution by the International Criminal Court unless it opened independent investigations of what the report said were repeated violations of international law, "possible war crimes and crimes against humanity" during the operation.......

Amid a detailed examination of most of the major incidents of the war – albeit one carried out five months after it took place – it says that:

* The first bombing attack on Day One of the operation, when children were going home from school, "appears to have been calculated to cause the greatest disruption and widespread panic".

* The firing of white phosphorus shells at the UN Relief and Works Agency compound was "compounded by reckless regard of the consequences", and the use of high explosive artillery at the al-Quds hospitals were violations of Articles 18 and 19 of the Geneva Convention. It says that warnings issued by Israel to the civilian population "cannot be considered as sufficiently effective" under the convention.

* On the attack in the vicinity of the al-Fakhoura school where at least 35 Palestinians were killed, Israeli forces launched an attack where a "reasonable commander" would have considered military advantage was outweighed by the risk to civilian life. Under Article 6 of the International Covenant on Civil and Political Rights (ICCPR), the civilians had their right to life forfeited. And while some of the 99 policemen killed in incidents surveyed by the team may have been members of armed groups, others who were not also had their right to life violated.

* The inquiry team also says that a number of Palestinians were used as human shields – itself a violation of the ICCPR – including Majdi Abed Rabbo, whose complaints about being so used were first aired in The Independent. The report asserts that the use of human shields constitutes a "war crime under the Rome statute of the International Criminal Court"."
Posted by Tony at 4:09 AM