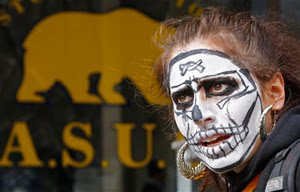 (University of California at Berkeley student Natalia Garcia protests on campus during a day of demonstrations, marches, teach-ins and walkouts planned nationwide. Events are being held at most of California’s public colleges and universities to protest budget cuts that have led to canceled classes, faculty furloughs and steep fee hikes.)

"There are no constraints left to halt America’s slide into a totalitarian capitalism. Electoral politics are a sham. The media have been debased and defanged by corporate owners. The working class has been impoverished and is now being plunged into profound despair. The legal system has been corrupted to serve corporate interests. Popular institutions, from labor unions to political parties, have been destroyed or emasculated by corporate power. And any form of protest, no matter how tepid, is blocked by an internal security apparatus that is starting to rival that of the East German secret police. The mounting anger and hatred, coursing through the bloodstream of the body politic, make violence and counter-violence inevitable. Brace yourself. The American empire is over. And the descent is going to be horrifying........

The capacity to exercise moral autonomy, the capacity to refuse to cooperate, offers us the only route left to personal freedom and a life with meaning. Rebellion is its own justification. Those of us who come out of the religious left have no quarrel with Camus. Camus is right about the absurdity of existence, right about finding worth in the act of rebellion rather than some bizarre dream of an afterlife or Sunday School fantasy that God rewards the just and the good. “Oh my soul,” the ancient Greek poet Pindar wrote, “do not aspire to immortal life, but exhaust the limits of the possible.” We differ with Camus only in that we have faith that rebellion is not ultimately meaningless. Rebellion allows us to be free and independent human beings, but rebellion also chips away, however imperceptibly, at the edifice of the oppressor and sustains the dim flames of hope and love. And in moments of profound human despair these flames are never insignificant. They keep alive the capacity to be human. We must become, as Camus said, so absolutely free that “existence is an act of rebellion.” Those who do not rebel in our age of totalitarian capitalism and who convince themselves that there is no alternative to collaboration are complicit in their own enslavement. They commit spiritual and moral suicide."
Posted by Tony at 6:21 AM