Palestinians should now declare their independence 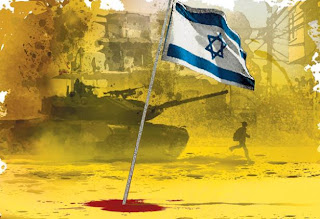 "....This week the Obama administration – who give Israel $3bn a year, more than they dole out to any other nation on earth – made a meek and craven request for Israelis to simply have a pause in seizing even more land, and to sit down with the Palestinians. Prime Minister Benjamin Netanyahu responded with a big concrete slap: the announcement of 1,600 more homes to be built on occupied Palestinian land from which Arabs will be forcibly kept out. He has made it plain he will not loosen his grip by an inch, announcing: "Even if [Palestinian President] Abu Mazen comes along and says he's ready to sign a peace deal on the spot, we will restore settlement construction to its previous levels." No compromise. Never.

How does this look to the Palestinians? Their story is so rarely explained without disinformation that it still seems startling when it is stated plainly. Until 1948, the Palestinians were living in their own homes, on their own land – until they were suddenly driven out in a war to make way for a new state for people fleeing a monstrous European genocide. They lived huddled and dazed in the 20 per cent of their land they were allowed to keep. They hardly fought back: they wept and dreamed of return. Then in the 1967 war, even these small strips were conquered with tanks and platoons.....
Posted by Tony at 3:47 AM