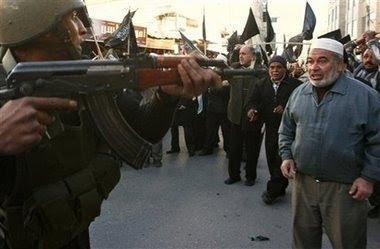 (Left: A PA quisling trooper for hire threatening to shoot a demonstrator in Al-Khalil (Hebron))

By Khaled Amayreh in Ramallah

"....With a conspicuously helpless Palestinian Authority (PA) doing next to nothing — and arguably capable of nothing — in the face of Israel’s arrogance of power, frustration among ordinary Palestinians is building. It is not unlikely that the seeds are being sown of a full-fledged Intifada if the present trend continues. However, a fresh Intifada would confront the Western-backed PA with a real dilemma that could put into question not only its legitimacy — such as it is — but also its very survival.

This week, Israel delivered a stern warning to the PA: “Stop the stone throwers, or we will.” The problem, however, is that a crackdown by PA security forces on Palestinians reacting to Israeli provocations and aggression would be very unpopular, as it would show PA security forces repressing their own people on Israel’s behalf [COMMENT: So what is new? They have done that many, many times. This is the main function of these Dayton brigades, after all!]. On the other hand, should the PA decide to side with the masses against Israel it would risk its own survival, as the Israeli army would be forced to retake Palestinian population centres as happened in 2001 and 2002."
Posted by Tony at 1:27 PM